October saw one of the most competitive National Championships for the NSEA (National School Equestrian Association) at Addington Manor in Buckinghamshire.

St John’s was front and centre with one of the biggest squads across the four days with seventeen riders who had done sowell to qualify to be amongst the best of the best riders in the country.

The following students represented the school from year 7 – Sixth Form:

As the squad show jumped in classes of 200 riders we had some great results early on with Emily Pash, Sophie Pash, Charlie Ahl and Lottie Turnell finishing fourth as a team and Sophia Cichero, Izzy Down, Jemma Woods and Elena Kristensen finishing seventh in the jump off. With Emily Lappin just missing out on the top 10  Nationally to place 12th. Our 90cm Show Jumping teams did us proud by riding very competitively and our team of Lucy Towle, Charlie Ahl, Sophie Pash and Emily Pash saw off 55 teams to get in to the jump off to place 5th in the country.

In the 80cm Jumping with Style competition we had some great rounds from Millie Turnell, Sophie Pash, Lucy Towle, Imogen Thompson and in a very competitive class Charlie Ahl place second Nationally which was a huge achievement.  The height kept going up during the weekend and the team of Emily Towle, Daisy Down, Charlie Ahl and Hannah Hall jumped some great rounds to place 8th Nationally in the 1 metre class.  Daisy Down also picked up a 7th Rossette for her dressage test which was great.

The excitement continued in to the evening on Friday in the main arena  where Millie Turnell jumped on the England squad who placed a very close second behind Scotland in a nail biting jump off. Well done Millie under the pressure and atmosphere!

Finally Sunday saw the 90 Jumping With Style, the team of Izzy Down, Sophia Pash, Emly Pash and Charlie Ahl jumped out of their skin to challenge the top 8, just missing out on a placing, However Charlie stormed it to the top and placed 2nd individually which was quite something!

Hannah Hall finished our great weekend by topping her Eventing League at Novice level.  Parents, ponies and all the rides should be so very proud for getting to this Championships and placing in the top riders in the country at NSEA.

After a well earned rest the squad was out competing in November to qualify for Hickstead which is in May 2020. Under some very cold and wet conditions the St John’s riders did not disappoint. We now have seven riders already going to Hickstead.  Millie Turnell and her sister Lottie, Mollie Morris, Lucy Towle, and her sister Emily, Izzy Down and Charlie Ahl and Sophie Pash.

We will be back in the New Year after a break for the ponies and riders, so watch this space in 2020! The school has got quite a reputation to uphold. 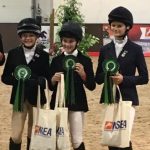 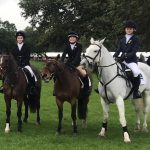 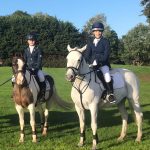 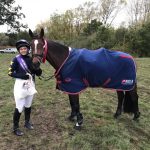 Click a thumbnail to open a larger version of the photo in a new tab.