The challenge is on!

After last year’s incredible performance in the Race to the Line Rocket Car Challenge, when two of our Year 7 teams finished in the top 10 nationally, there’s a lot at stake for the current Year 7s.

The Race to the Line competition is a national STEM competition inspired by the Bloodhound SSC, which aims to achieve a new world land speed record.

Initial competitions have been taking place to decide which students go forward to the next round of the competition. In February students got to race their team rocket cars. After St John’s success at the National Finals last year, with a car reaching 99mph, every Year 7 student has worked as part of a team to design, brand and make their very own model car.

Cars lined up, complete with their eye-catching graphics and some awesome team names. With cars in place on the starting grid, students stepped up and launched them across th 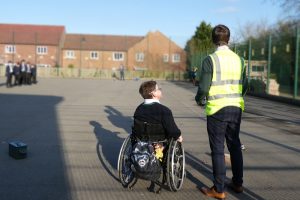 As the rockets ignited and the cars accelerated, the crowds watched to see if their creations remained intact. Drama unfolded as wheels, axles and foam pieces were sent flying through the air.

The teams with the two fastest cars will represent St John’s at the Regional Finals. The winning teams will be revealed in the Year 7 Celebration Assembly at the end of Term 3. 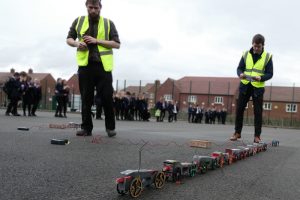