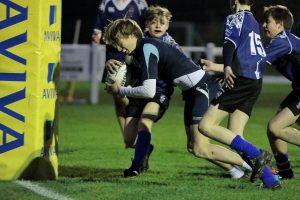 A big win, a cup final no less, the opposition shut out – completely – and the reward of silverware for these lads and (in time) the St. John’s trophy cabinet. On top of that, an excellent, brilliant, all-round team performance with: variety; intensity; vision; clear heads & cool passes. And some Greggs tray-baked-products as reward.

And here’s a thing: good on ’em. The ethos that the U14s Marlborough Mustangs bring across the hills to their school Year 9 team is this: we like to win, we love to win, but not at all costs. It’s all about the enjoyment, the generosity of spirit, the smiles on the faces afterwards; the banter as great passages of play are remembered and talked about and, above all, the grin, the big grin, as they think: ‘hey, hey… when are we playing rugby again?’

The answer, for one fella, is not for a while.

Blessed with a healthy squad, we coaches have the leeway to plan the substitutions and rotations before a match in some detail. Prop, that stalwart of the scrum, (loosehead or tighthead, what curious handles) is a position that exhausts those watching, let alone those playing. Rotation required, in theory.

As it turned out, in this game, there was no way our props were going to leave the field – for a breather, that is – whatever the coach instructions were. Hunger, hard work, and the best impression of battering rams you’ll ever see.

The nice bit here, if we’re looking backwards for a moment, is that these lads have generated the most beautifully healthy competitive environment. Last time we played Commonweal, this St. John’s team, ignoring some first-up think-we’ve-beaten-them-already nonsense, played some exceptional rugby. At the heart of that was prop Shane, socks down and super-powered, who picked and carried so relentlessly, so effectively, that the opposition had no option, but to wilt. Big win. Marvellous stuff.

More recently, last Sunday, back in the Mustangs environment, we had a front row who played two games on the trot, unchanged. Utterly drained, they were. Hats off, again, to you lads.

And then. A murky Thursday afternoon in December. Doesn’t matter, the buzz is building. First XV pitch, exceptional turf, dazzling floodlights. 22 St. John’s boys, revved up, ready for a game. Beside them, the touchline support, another essential ingredient. Who wants the game most? Who wants this game?

The answer… you know. If you put 59 unanswered points on a team it suggests a rout, but the opposition fought hard, rarely flagged, and challenged these boys across the pitch. And how well St. John’s rose to that challenge, each and every one of them. To pick one out, would do a disservice to another, so complete, and committed this performance was. Exceptional stuff, nothing less than outstanding, and how proud we are. 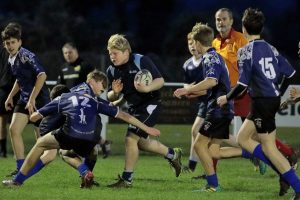 Ed ‘The Tank’ taking on all-comers

That said, setting the tone for that performance, from the very first minute, was our blond-haired prop, Ed, giving it both barrels and more. The military metaphor is apt, given his nickname, ‘The Tank’, and this was an individual performance as armour-plated as you could possibly imagine. Brave, fearless… unstoppable.

Until… well, hopefully that moment has already begun to fade. A double fracture to the ankle is a big blow, but already the positives are being drawn. Champion on the pitch, champion in the team X-Ray charts, we all salute you Ed.

And beyond? This will live long in the memory, and these boys will be walking taller, forever, and deservedly so. They play the game in exactly the right spirit, though they do strike fear into the opposition, and occasionally the coaches too. When the Greggs fodder was passed into the changing room afterwards, it sparked a feeding frenzy that would make your blood run cold. Remember the scene in Jaws where Chief Brody spoons chum over the stern? Yup, a bit like that.

So, in summary, and to misquote further: ‘St. John’s – you’re going to need a bigger trophy cabinet’. Happy days. 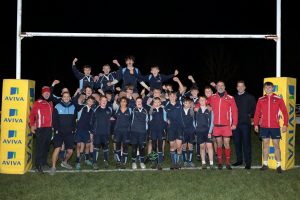