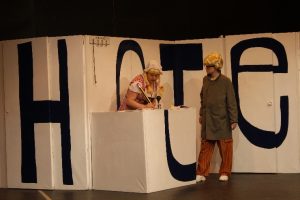 The two actors certainly impressed the audience with their versatile performing skills, managing to play parts of Mr and Mrs Schröder, a hotel guest, a criminal and 2 police officers, using a secret door behind the counter to get backstage undetected to change costumes in record time.

The play was set in a hotel but the owners Herr und Frau Schröder had not had a guest at their hotel for months, so they were excited when a man arrived wanting a room for a night. Their excitement was short lived when they read online that an escaped criminal fitted the description of their new guest. They tried to act normal while they awaited the arrival of the police, but their fears got the better of them as they tried to protect themselves.

One of the highlights was the involvement of students from the audience. Initially, two students had to assist the couple to advertise their failing hotel on Facebook before a third student had to keep the police distracted while the owners 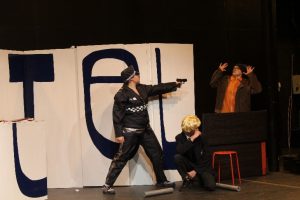 were covering up for a murder they thought they had committed. The students’ German language skills were put to the test and everyone in the audience was truly impressed with how well all three handled the challenging situation they were put in without prior warning.

St John’s students enjoyed the play providing wonderful feedback afterwards. They thought that it was surprisingly easy to follow and many of them were impressed by their own understanding. ‘Very funny’, ‘Interesting and interactive’, ‘Amusing yet educational’, ‘I just want to go to Germany right now!’.